Drinking Only Water Can Still Cause Vomiting 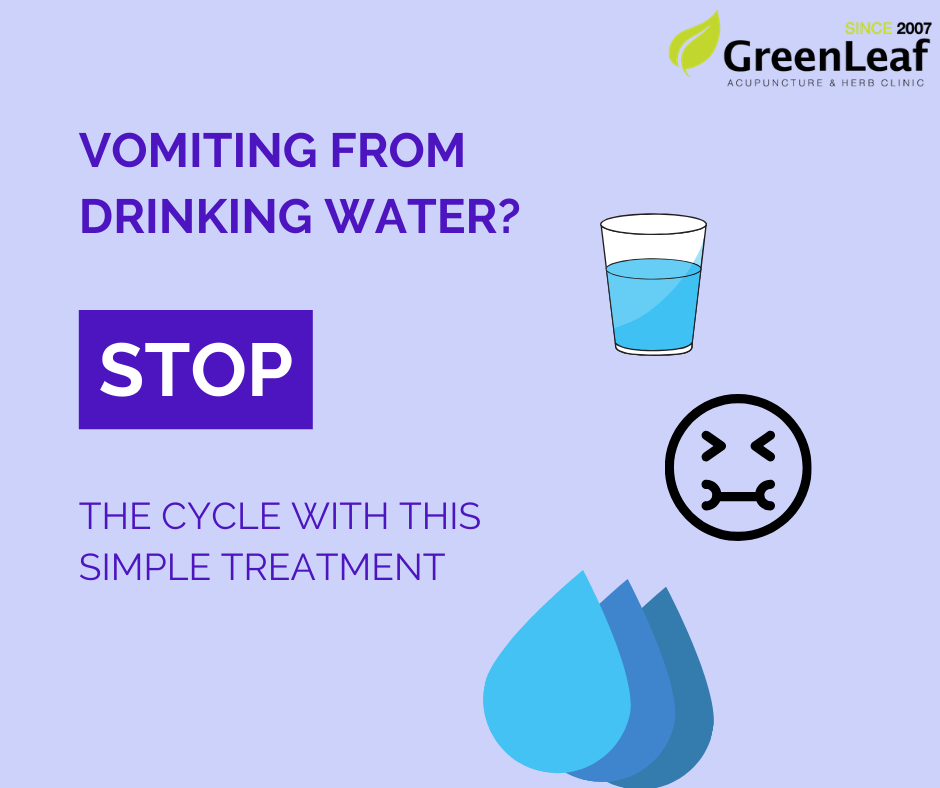 Phillip, who called last week to ask about gastrointestinal issues, finally visited our clinic. We were expecting Phillip to describe symptoms of indigestion or heartburn based on our phone call, but in the one week between his visit and our phone call, his symptoms evolved into vomiting. Phillip further explained that while he expected to vomit when eating food, he found that he also vomited even when only drinking water — so much so that he had already lost more than 5 kg. In general Phillip did not experience any gastrointestinal issues. He was a healthy man in his 20s who ate well, slept well and had healthy bowel movement. This prompted us to ask him what could possibly cause a healthy man like Phillip to begin vomiting. He answered that he began to have a fever and a sore throat when his stomach caused him to feel nauseous which ultimately led to him beginning to vomit. After starting to vomit, Phillip said he only drank water but to no avail. Phillip ended up going to the emergency room to have a blood test and receive fluid IV injection. However, this did not stop the vomiting. Phillip said he desperately searched on the internet and realized that the only option he had not explored was an acupuncture clinic which is why he called our Eastern medicine clinic.

Patients who have not eaten properly, are barely fighting off dehydration, and have met with their doctor only to get a fluid IV injection without mitigating their symptoms are extremely desperate when they come to our clinic. Phillip was no different. He looked exhausted and despite his condition, still seemed to have reservations on whether or not Eastern medicine could help alleviate his symptoms. Although Phillip’s symptoms were serious, we told him not to be too concerned as his symptoms were very famous and common in the history of Eastern medicine. Dehydration followed by vomiting often appeared after an epidemic or a severe case of the flu. Typically the dehydration starts from extreme cases of sweating, so just to be sure we asked Phillip, “Did you sweat a lot during the early stages of the cold?” To which he replied that he experienced a lot of sweating when he began to throw up.

If you summed up Phillip’s case, he had a fever accompanied by a sore throat which evolved layered to extreme sweating and vomiting. Additionally attempting to hydrate with water still caused vomiting even if he did not eat food. To understand this from a physiological perspective, cold sweat and vomiting is due to an imbalance of electrolytes (potassium, sodium, etc) in the body. In general, electrolyte imbalances can cause a multitude of issues but in Phillip’s case, it prevented the absorption of water. Imagine this: your stomach is already full of water because the body is unable to intake the water into the bloodstream. But because you feel thirsty, you add water to the stomach that is already full. There is no way out other than up, which is why Phillip began to vomit. Additionally, the blood vessels begin to dry as the body is unable to absorb the water. This causes the body to send signals to the brain that you need to drink more water which is why you feel thirsty despite the water piling in your stomach.

These symptoms can be treated through the following medications: Poria, Polyporu, Rhizoma Atractylodis Macrocephalae, Rhizoma Alismatis and Ramulus Cinnamomi. Poria and Rhizoma Atractylodis Macrocephalae help the uptake of water from the gastrointestinal tract into the bloodstream while Polyporu and Rhizoma Alismatis help the uptake of water cycle properly into urine. Ramulus Cinnamomi expands blood vessels to increase the efficiency of the water to urine cycle. To summarize, this solution allows the uptake of water into the bloodstream and ensures that water is cycling efficiently from water to urine.

Phillip, who came in as a desperate patient, was prescribed a simple acupuncture treatment supplemented with eating Go-rei-San little by little. In these cases you should never gulp down water. Instead, like with the Go-rei-San, it was important for Phillip to let the water sit in his mouth as he drank little by little. This was so effective that by the next day Phillip was already ready to drink water. The day after, he was fine eating porridge. Still concerned, we had Phillip book an appointment for five days later. However, we got a call from Philip saying that he had made a complete recovery and was back to normal. Phillip said his conditions were gone and that he did not need any more treatment and so that we decided to terminate treatment right then and there. As we can see from this example, the effects of Eastern medicine on the after effects of a complex cold or epidemic are often surprisingly fast and effective.