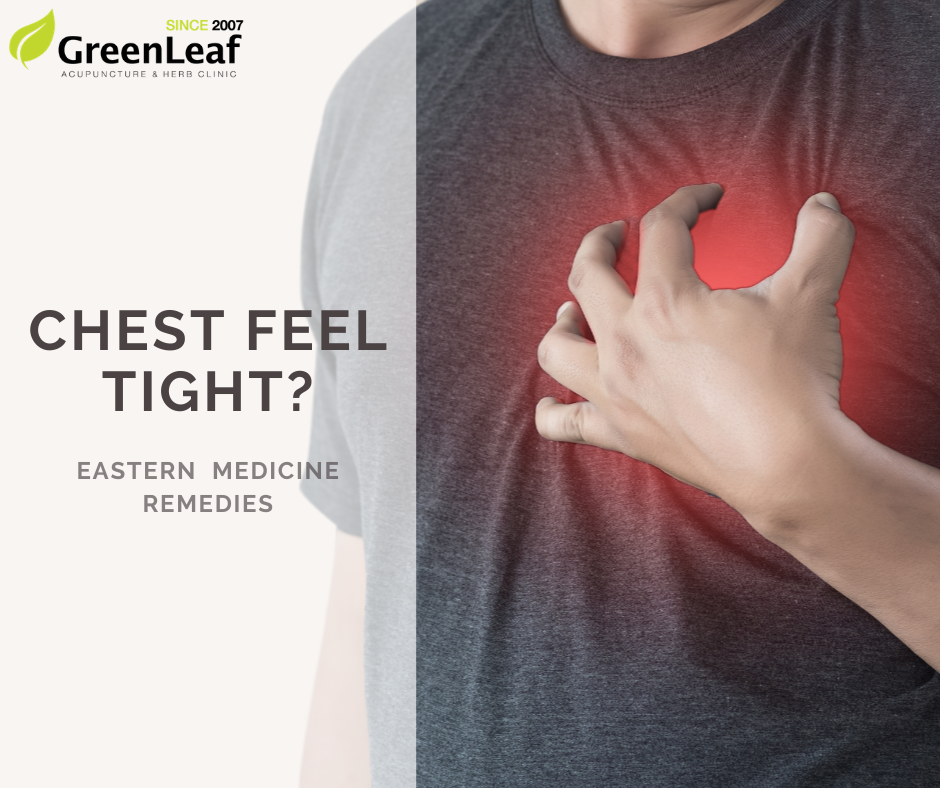 A college student came to our acupuncture clinic after feeling chest tightness and congestion. As the student was explaining the hardships, her voice tone was not very high and she did not talk that much. It turned out, she was also experiencing severe depression and was having trouble sleeping at night. She explained how her face was often hot with a fever and she would often lose her appetite. She also had difficulty studying due to her frequent headaches and dizziness.

Chest tightness is a common symptom for neuropsychiatric patients who suffer from insomnia, depression, panic disorder, and so on. In severe cases, patients feel the urge to even want to give a slap to their chest in attempt to relieve the tightness. For those with mild chest tightness, frequent sighing is also a common symptom. These symptoms are indicators of congested chest circulation in the blood vessels or lymph nodes, and the presence and absence of these symptoms are also used to identify neuropsychiatric disorders.

Patients who complain of chest tightness are treated with several different methods. It is important to analyze whether this tightness is correlated with feelings of anger or feelings of depression. In this case, since the patient complained about chest tightness and depression, prescriptions of ‘Fructus Gardeniae’ and ‘Fructus Aurantii Immaturus’ were ideal treatments. Fructus Gardeniae helps relieve congestion in the blood vessels and helps to promote bile secretion. Fructus Aurantii Immaturus helps to shrink the heart muscle and increase cardiac output to promote circulation in the chest. It also helps with digestion by promoting the movement in the intestines. Synephrine, which is in the components of Fructus Aurantii Immaturus, is currently being researched and developed as a new antidepressant because of its strong antidepressant capabilities.

After taking Fructus Gardeniae and Fructus Aurantii Immaturus, most of the patient’s symptoms disappeared. However, physical symptoms are caused by psychological symptoms resulting from a specific source. The patient in this case was experiencing a long-standing feud with her parents. Even after taking the prescribed medicine, the patient was treated for a considerable period of time with Eastern medicine to resolve this root of the issue.

Panic Disorder & Anxiety: Is the Mind or Body First?