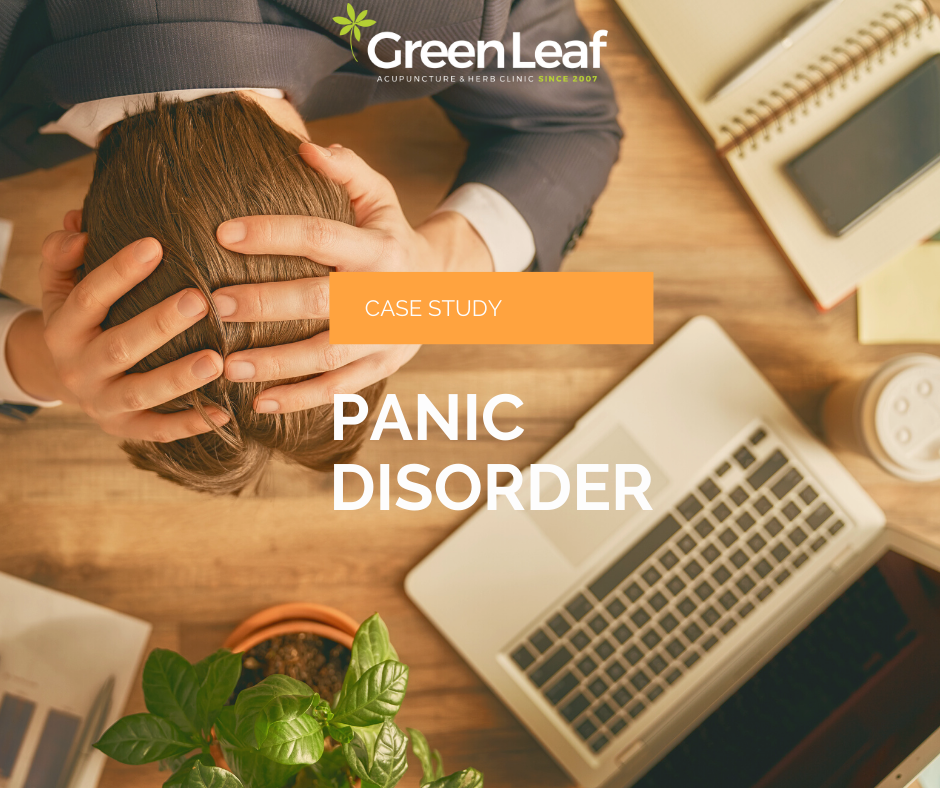 A Canadian woman in her late 30s visited our clinic. She was taking care of her child who was sick for some time but suddenly a few days after, her own heart started to beat rapidly while sweating intensely which then was followed by a huge wave of anxiety. Her symptoms got better in the afternoon and even better in the evening, but when she woke up the next morning, her heart began to pound again. After meeting with her doctor, she was recommended to take medication for panic disorder, however she was concerned that once taking the medication, she would need to continuously take more so she wanted to look into natural ways to treat her condition instead.

This patient had almost all the common symptoms of panic disorder which consist of rapid heartbeat, sweating, muscle tremors, chest pains, sudden fever and face redness, nausea, and sudden panic. People sometimes come to us asking if they have panic disorder, but if more than four of the above symptoms are present, it is best if they seek the help of experts. In any case, this patient already sought advice from a doctor and was diagnosed with panic disorder. Now the question was how do we treat her?

The first step in solving this condition with Eastern medicine is to understand all the symptoms the patient's body shows. For example, this patient became easily cold and hot. Her face would usually become hot which would prompt sweating if she was nervous. Her mouth would often be dry and she would sometimes experience a bitter taste in her mouth. She experienced digestive issues and would lose her appetite if she was under a lot of stress. She suffered from frequent constipation and urination, and often felt like her chest was tight and stuffy. She had trouble sleeping at times, and her neck and shoulders were stiff. Her eyes easily became tired and would often feel dizzy.

These symptoms are paramount for Eastern medicine doctors to diagnose and treat patients. The reason being that specific medicine is available for specific symptoms. For example, in this case, Radix Bupleuri can release the blockage of the thorax, Radix et Rhizoma Rhei can relieve constipation, and Poria can release muscle tensions. It is understood that if you control the constant build-up of stress in the sympathetic nerves and relieve the gastrointestinal tract to solve digestive issues and constipation, mental issues will also be solved. Panic disorder is the last result due to a collapse in the body’s homeostasis. Eastern medicine’s treatment approach is to restore the body’s homeostasis to then treat panic disorder.

In conclusion, the patient was treated with herbal medicine for ten days and treated with acupuncture throughout five sessions. Fortunately, after all treatment, the symptoms disappeared. The treatment period was short in this case because the patient was treated only a few days after she began experiencing panic attacks. The longer the disorders are not treated, the longer the treatment period. This patient’s case was that she accumulated significant stress from taking care of her child’s illness that her sympathetic nerves developed under stress and naturally her panic attacks arose.