Sympathetic and Parasympathetic Nervous System Treatment: 2,000 Years Ago to Now 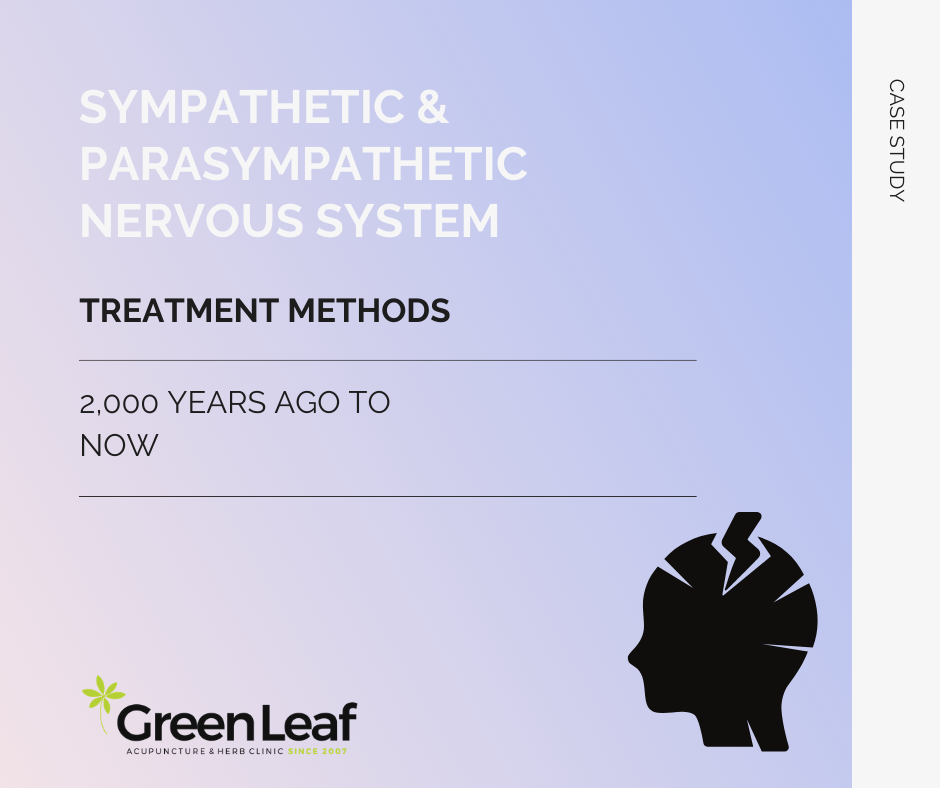 A caucasian woman in her early 50s visited our clinic with the interest of receiving treatment after her daughter was previously treated at an acupuncture clinic. She stated she was suffering from panic disorder and after much thought, she became interested in treating her mental illness through acupuncture and herbal medicine. A problem that occurred during her childhood was what she considered to be the cause of her panic disorder as the recurring thought of her childhood made her uneasy and difficult to calm down. She would sometimes become anxious while sweating and her heart would suddenly begin to pound. With symptoms like these, it is most common to experience sleeping problems, which was the case with this woman as well. These symptoms can be considered to be categorized under Generalized Anxiety Disorder (GAD).

To understand these neuropsychiatric disorders, first, it is important to understand the human physiology system called the sympathetic nerve system and the parasympathetic nerve system. The words may sound unfamiliar, but they are not difficult concepts. With a little imagination, it will be easy to understand. Just imagine a fierce and hungry brown bear in front of you. You will have to fight or run away to survive. What changes will happen to our bodies to do so? You will first need to increase the blood supply to your muscles to run away. Your heart rate will of course, increase given the situation. When a limited amount of blood flows into the muscles, the blood supply to the gastrointestinal tract will decrease. Would you be feeling hungry in this situation where you are risking your life? The answer is no – the digestive tract will naturally be suppressed. Do you think you will be able to fall asleep? The answer once again is no – you will be in serious trouble if you fall asleep. This is the process of the sympathetic nervous system.

So how did Eastern medicine doctors understand the effects of the sympathetic and parasympathetic nervous system to treat panic disorder 2,000 years ago? An Eastern medicine book written 2,000 years ago says that when your heartbeat rises, your face turns red, and you cannot sleep, you should use the medicinal ingredient called Rhizoma Coptidis. When your heart feels tight and congested, you feel numb, and you feel uneasy, you should take Fructus Gardeniae. When your heart pounds, your muscles shake, and you feel dizzy, it is advised you take Poria. Of course at the time, there was no explanation for how and why the body was treated using these methods because they did not have a strong enough understanding. It only states that for specific symptoms, specific medication is the answer. Now, with the development of modern science, we can explain why.

For the patient that seeked our clinic’s help to overcome her panic disorder resulting from her childhood trauma, we treated her with Rhizoma Coptidis. The patient’s anxiety and sleep improved significantly after a month of treatment. Although she was unable to completely overcome her childhood trauma, she was still satisfied with being able to recover from her physical and psychological troubles.